From New Brunswick to Vancouver's Nightlife to Saturna - Michael's Story 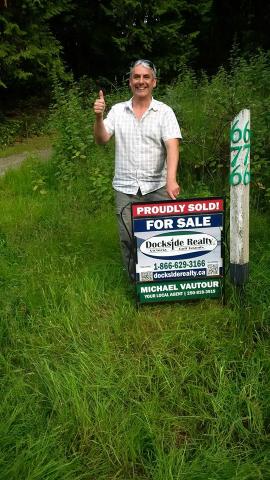 Michael Vautour is our realtor on Saturna Island. He's been a resident of Saturna since 1999, he loves it there, and he is in turn much loved by the Saturna Island community. It's common for those curious about the Gulf Islands lifestyle to ask us about our pre-island lives and how we made it work once we moved, most Gulf Islanders have a story to tell about their journey from urban to rural island living. Here is Michael's story:

I was born and raised in Saint John, New Brunswick. I worked my way through high school packing groceries, and upon graduation, the best I could do there at the time was managing a toy store.

I used this position a year later to relocate westward to Calgary where I lived and worked for 3 years. During this time I was surprised by how much I missed and longed for the Ocean! For that reason, I gave notice and moved onward to Vancouver. A month later I found myself without work and down to my last $30. I decided to be reckless and headed downtown to drown my sorrows. When the bartender asked me what he could get for me, I replied “a job”! The following night I began what turned into a 17 year run in the hospitality industry in Vancouver, the last 10 years of which I spent as the Bar Operations Manager for the Arts Club Theatre on Granville Island, a coveted position where I was happily surrounded by wonderfully talented people.

It was during this period that I realized that I hadn't seen much of British Columbia aside from it's nightlife, I decided to get started by exploring the Gulf Islands.

I noticed the “Boot Cove Lodge”, now known as the “Saturna Lodge” advertised for sale and the curiosity lead me to Saturna Island first. My stay at the Lodge was fine, but my visit to Saturna was magical. It was like I'd finally arrived home. I couldn't get enough. Each time I set out to explore another island, I ended up back on Saturna, over & over again.

One of the few people I had met and became acquainted with was the proprietor of the Lighthouse Pub which was part of my arrival & departure routine when visiting Saturna. Over the years we became friends and she became aware of my professional background. One day, out of the blue, she called me.

She said “I know this is a long shot, but it can't hurt to ask. Would you ever consider coming to work at my Pub on Saturna?” Without skipping a beat, I asked her when I would be needed.

Knowing the job at the Pub was not going to replace the position I was leaving behind, I contacted the Saturna Lodge to inquire about additional employment. They said they could always use more help. Once they received my resume, they re-contacted me to offer me a better suited position at Saturna Vineyards in the Wine Shop & Tasting Room that they had scheduled to open to the public that summer.

By the turn of the century (I love saying that!) I had both heals dug deep into Saturna soil and there was no turning back!

For over 6 years, I worked in the public eye, days in the Wineshop and nights in the Pub until I pretty much knew everyone: locals, weekenders, and tourists alike. I eventually freed myself from the night work and soon added BC Ferries to my slate, again keeping in tune with the comings and goings of the Island. Then after a decade of Island life, the economy took it's toll on the Vineyard and I found myself in a position where I needed to re-invent myself, or give up and leave.

In 2013, when the Real Estate market was stagnant, and everyone was cautioning me otherwise, I enrolled myself in the Real Estate trades and Services Course and obtained my Realtor's License in April 2014. Three months later, I had the pleasure of experiencing helping someone else achieve their dream of beginning their own journey on Saturna Island!

Since then, I have been involved with 24 property sales on Saturna as well as having the pleasure of seeing all of Saturna's newcomers in the ferry line-ups as they happily come and go as I once did in the previous century!

I have not only found my home, but I have found the profession I love and wish to continue until such time as I experience the next phase of my journey: “Retirement on Saturna”!